A resource for you to discuss community issues & events, the funeral industry, or life in general. 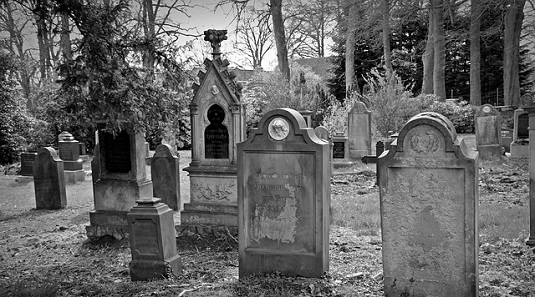 Return to the Blog

A fascination with death and what comes afterward has been a consistent part of the human experience for thousands of years. Every year in the United States, the Halloween season seems to emphasize this more than ever before with common traditions that include scary stories, costumes, and maybe even a visit to a cemetery. After all, if Hollywood films are anything to go by, cemeteries are rife with things that go bump in the night.

But where exactly did these beliefs come from? What has led us to relate funerals and cemeteries with ghosts, ghouls, and other scary things to be feared?

We’re taking a closer look at some of the most common (and unusual) superstitions, myths, and misconceptions surrounding funerals and cemeteries. We provide the history behind these myths so you can better understand where they came from and why.

In ancient Greece, it was believed that putting coins on the eyes of the deceased would help them pay for passage across the river Styx and into underworld—the realm of the dead. And while this practice lasted for centuries (even going so far as to become adopted by cultures outside of Greece), there is also believed to have been a more practical reason for the coins on the eyes. Modern scientists believe that the weight of the coins was used to keep the eyelids closed. In some cases, stones were used instead of coins. This was especially important as many cultures believed eyes to be “windows to the soul” and didn’t want an individual’s spirit to escape before they could make the trip to the other side.

While humans have always been fascinated by death to some degree, the Victorian Era (1837-1901) brought with it a number of new and interesting beliefs—as well as fears—regarding death and the deceased. One of the most common? Wearing black to a funeral. Today, this is a regular practice for many and is nothing more than a sign of grieving and respect for the life of the recently departed. But it didn’t necessarily start this way.

The practice of wearing black to a funeral actually stemmed from a fear of being haunted. Family members of the deceased believed that, by wearing black to the funeral (for women, this included black veils over their faces), the spirit of the deceased would be unable to see them and, therefore, be more willing to move on and not haunt the lives of those they left behind. This closely tied in with the Victorian belief of “spirit hopping,” though they didn’t exactly call it that back then. Rather, a popular superstition prior to (and during) funerals was that the spirit of the deceased would try to enter the bodies of the living. In an attempt to prevent this, the family of the deceased would cover mirrors and pictures throughout the home as a way to keep the spirit from trying to claim them. You may recognize these as familiar tropes in modern-day horror and paranormal stories. This is also believed to be the reason why pallbearers wear gloves; another practice that still exists today.

You may have noticed that grave markers in cemeteries often face in the same direction—toward the east. This is believed to be a leftover from an old Pagen tradition of worshiping the sun. The sun rising in the east was believed to bring renewal and rebirth.

And while this certainly may be true, it’s important to note that cemeteries on the scale we see them today have not always been around. In fact, until the 1830s, the vast majority of burials were done on private property. Families would have their own private cemeteries located on family land where generations of their loved ones were buried together. However, as urbanization began to change the landscape of cities and land became scarcer, churchyard cemeteries began to develop as a common location for burials. Grave markers began to be used more consistently as a way to identify the final resting place of a deceased loved one in a shared/communal space. Though, by no means was this the first time headstones and footstones were used to mark a grave. While these stones serve the practical purpose of identifying the name and age of the deceased, a more spiritual reason has also been applied to the use of these stones. Many religions, including Christianity, Judaism, and Islam, share in the belief that the dead will one day rise again and reunite. It was a commonly-held belief that grave markers were a way for family members of the deceased to make sure the spirit of their loved one would not emerge—or escape—before they were called to do so.

Flowers have been a long-standing part of the funeral experience. We often send flowers to the grieving family. Flowers are used to decorate the funeral as well as the final resting place of the deceased. So, it’s no surprise that one of the many superstitions surrounding funerals and burials/graves has to do with flowers.

It used to be believed that the type of flower growing around a grave indicated what kind of life the deceased led. The growth of wildflowers around a grave suggests a happy, pure, giving life, while the growth of weeds is thought to indicate the opposite.

With what we know today about the randomization of pollination, in addition to the fact that most cemeteries today are maintained on a regular basis—often with an entire team of individuals responsible for keeping the land clean and manicured—this belief has largely disappeared over time.

The number of myths and superstitions surrounding death, funerals, and cemeteries can seem endless at times. However, each of these beliefs stems from some kind of historical influence that has shaped our practices and the way we perceive death as a whole. By contextualizing and acknowledging the history of these beliefs, we can better understand how and why the funeral industry and some of its practices have gotten to where they are today. And we can better embrace and celebrate the lives of our dearly departed.

So, in the end, these old beliefs and practices are not very scary or mysterious at all.